If you could only see the mess rooms, the boys have been busy decorating with flags, etc. It looks quite a treat. Church Parade 10.30am then free for the day. I have just had a look at the menu for dinner, and my word it is great. We have poultry, roast beef, plum pudding, three or four kinds of vegetables with beer and fruitcake.

I am sure some of us will be ill with pains in the little maney. But never mind we are going to have a good time if we bust. Dinner over, we just feel like sleeping and nothing else, but we are going to see our French friends, and their daughters. Needless to say we had a very good time, and arrived back to camp very tired, but happy indeed. I intend to slip on now to New Years Eve. I will always remember the night for it was not a peaceful one.

We had gone to roost and it must have been about 12.30am or there about, when the most awful noise was heard in the lines, and before you realised what was the trouble a crowd of our fellows had marched into the tent, beating tins, playing mouth organs, and I might tell you they did not stop for anyone, just walked over every one, I know. I received one fellow’s big boot on my chest, but what could you do it was New Years Day and they were singing this.

“We are the Ginger Beers

We are the Ginger Beers.

We do all the work, nothing to shirk,

We haven’t got a canteen yet.

But we are the Ginger Beers.”

You could see how happy they were, even if they had no canteen, they managed to get some beer somewhere. We spent New Years Day in the Cairo Zoo among our friends the monkeys. We afterwards went to our friends where we had some singing and dancing, quite a good time we had and no mistake. This is our last public holiday for a while for we have to settle down to right hard work. The harder the work the less time in Cairo. We have received our new Pontoons for bridging in double quick time. There are 6 Pontoons for 9 companies of Engineers, and from this time on we have to devote our time to this work. I have nothing else in my brain but Pontoon drill. But it is quite a change from the other details. 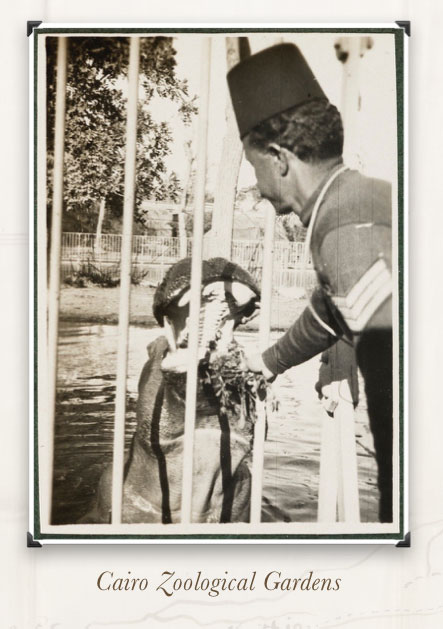 We are quite used to Egypt now with all its faults. I along with my pals went to see the Citadel and some of the Mosques, which are very interesting. Of course like a lot of blobs we were, we wanted to go straight in with our boots on but no we had to put holy slippers on. All the time we were in, we were on the look out for some curios but they watched us too much for that.

We have had more musketry, this time we had to march out to the rifle ranges over the sandy desert, it was work going over there with full packs up, but we spent some good times even at this far away range. If you could only hear what the new boys are singing out it would amuse you. For our lads have learned them all the slang and filthy talk they could do, and they make use of it with a vengeance. If you see a Native – now he is on to you with this, “Australi very good, very nice”. “Plenty money Australi”. “Buckets of piasters”, etc., it makes you tired of the whole lot.

There is not much news to put down this month, I did not trouble to take only things of interest so we will pass on to the next month.

We are quite seasoned Egyptians now, with faces as hard as stone. That is, with the sun and sand. I never saw such a place for sand. You get sand for breakfast, dinner and tea, it gets in your eyes, ears, down your throat, I think I have swallowed enough grit to last me through the war.

A terrible thing happened to us the other night. I was on horse picket, and happened to be on duty, and was going my rounds when I had to pass the big water tank, I hear water rushing but I thought it was coming over the top, so did not trouble so much over it. The next time I came around, I spoke to the sentry about it. He said it was only over flowing, by this time it was worse, so I told him it was leaking, he had better warn the guard. He only just warned them in time, then the tank burst, I rushed away to warn the Major and the rest of the picket for we had our horses to look after. In about ten minutes our camp was under water, with half of the tents swept away. We had to cut the leg ropes off the horses, and take them up to the Third Brigade ones. You never saw such rushing about in your life, bags, rifles, etc., blankets rushing them anywhere where it was dry. I managed to get my things moved away, we had to sleep anywhere and anyhow.

I along with my pals were very fortunate, for we got an empty tent so we did not fare at all bad. But in the morning what a change, you could see nothing but tents washed down, the sergeants tent was gone altogether, and the Engineer’s Store that was wood, and it received the full force of the water, books, plans, targets, etc., all floating about, or had been. It was funny to see the natives digging up the sand for things. More work for us to do. Clear up the rubbish and dry everything, besides turning over the sand so that it would dry. Any how it was a fine sample of native work – it had only been built since December and just lasted until February.

Now we keep getting little snatches of news that we are to leave, the Third Coy have been down on the canal Ismalia along with some of the 3rd Brigade Infantry. They have just come back from there. Our major has told us that we may leave any time now, for where, he does not know. We are all very interested in this news, for we are fit and ready for anything now.

Nearly the end of the month and yet we are here, we are just in the same game as we were in Sydney, packing up one day and unpacking the next.