I can tell you some of us did not sleep too well last night, for we were excited with the thoughts of going away from old Sydney. We were awakened about 5.00am and we had to clean up the tents, pass in our blankets to the Quarter Master, by the time this was done it was near our breakfast. We fell in again about 6.45am with all our equipment and rifles ready to proceed to the Transport. I remember having a good look at the old camp once again, and I can tell you most us were feeling a little sorry at leaving. But that soon passed away when we started to march away.

We then got into the special trams which were waiting at the entrance to Moore Park, and all the way down to Woolloomooloo Bay we were singing ‘Old Soldiers Never Die’.   There was a big crowd of people at the Quay when we got there, but the police kept them back, it was hard luck for some of the boys because they would have liked to have seen the last of their mothers, sweethearts before they embarked. We then got on to the ferries that were waiting and after some delay (which was filled in by sending kisses and waving handkerchiefs to the girls) we left the Quay and made for our transport the SS Afric A19. We embarked on her and were told to go down below to the Mess Tables until we were dismissed. After a long time we were dismissed, and we were then free to go about the ship. It was raining again and you never saw a more miserable day. Some of the ferry boats came very near to us, and gave us a ‘Cock a Doodle Doo’, and the people tried to cheer us up a little, what with the weather, and other little things we felt fairly miserable. 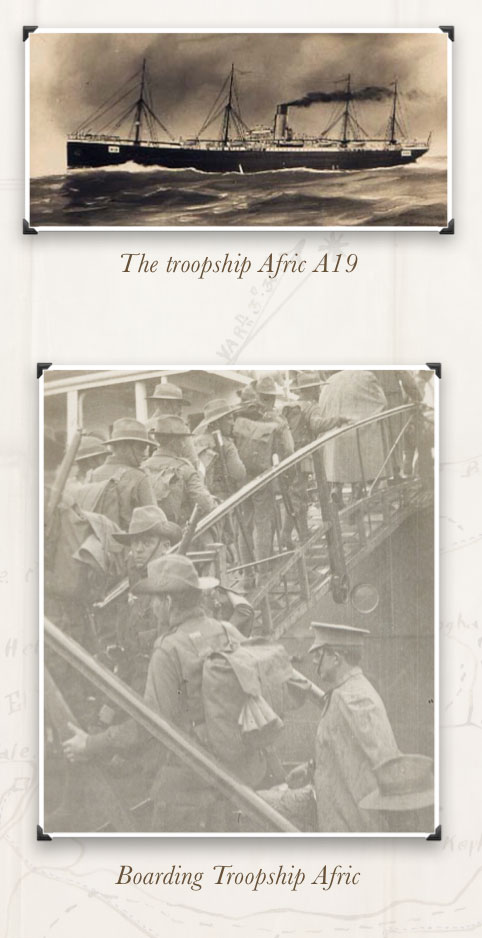 We are just sailing now away towards the heads, at last we are on our way to some unknown destination, what is in store of us we don’t know, but we are happy now. The boys are all up the rigging, or the washhouses, in fact every-where so that they could get a last look at Sydney. Just as we reached South Head some band was giving us a farewell tune just to cheer us up. Then we struck the entrance to the sea, between the Heads, and it was a little rough, and it was very funny to see the boys coming down the rigging, off the washhouses like a lot of sick rats. It was the first time some of them had ever left Sydney Heads, and they were sick, no mistake. Now I am going to have my tea, then find out the cosy little places on this ship. By the way we Engineers are right up forward along with the Army Service Corps, the 1st Battalion Infantry is down aft. You see I am getting quite a seafaring man now. I do not intend to keep up my diary on board for nearly every day is the same, so I will let it rest until some future date.

We are quite a happy family on this ship, and when I look over the side my thoughts go back to sunny New South. There are nothing but transports – 42, all in three lines, and we have an escort of HMS Minotaur, HMS Sydney, a Japanese Cruiser and a Russian. We had a good time waiting at Albany for the New Zealanders and we had a route march which we enjoyed fine. You will notice I have not put any dates down because I did not trouble to take notice. We called at Colombo, but did not get off, next Suez, and then we went up the canal, which is very interesting. You can see there are plenty of troops on the Canal. Indian and British. They sang out, and asked where we came from and where we were going. We arrived at Port Said, which by the look at first glance is not up to much. We were not allowed off the ship, but had to be content, and look at the place from a distance. This is the place where you see the milkman bringing around the cow and milking it while you wait. By this time, which I forgot to mention, we are bound for Cairo, Egypt and we are a little disappointed for we were thinking we might go to France or England.

By the way I forgot to mention Nov the 9th, a red-letter day in Australian history. It was the day HMS Sydney sank the German ship the Emden. I remember the Sydney racing away that morning, and we wondered what was in the wind, for she was going at top speed. We soon received word that the Sydney had sunk the Emden near the Cocos Islands, which was only 40 miles away from us. What a cheer was given when the news was given to us, and what reception the Sydney got when she caught up to us at Colombo. I will never forget it, for if the German Commander had only known how many troopships were near him, it is a thousand to one he would have had a try to sink some of us. It was about the end of November when we left Port Said, for Alexandria in Egypt, which was to be our destination. We arrived at Alexandria and we had to disembark everything, and we arrived in Cairo on the 3rd of Dec as near as I can tell and it was raining in Cairo when we arrived there. 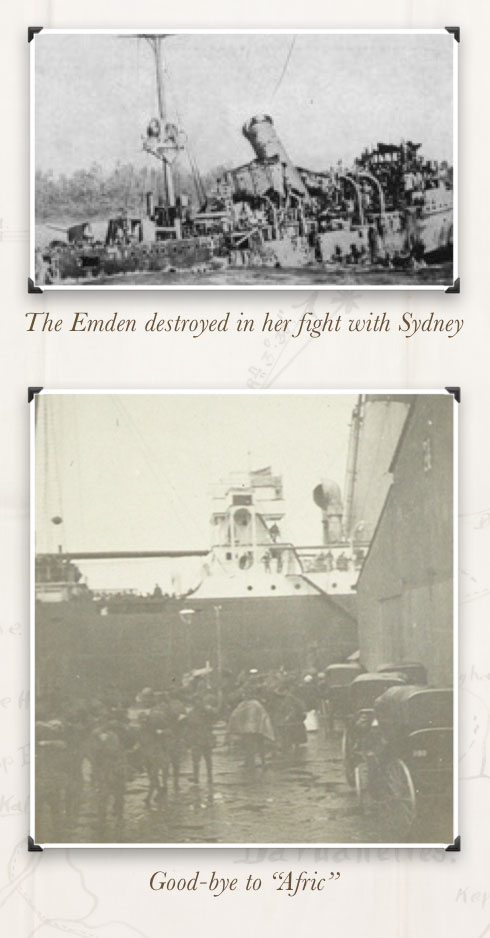