Another section as gone ashore, No. 3 under Lieut. Huntley. I have got out of the real had work, Cookie and me have been put on Sergeant’s Mess which gets you out of duty work, of course it is only being Mess Orderly for them, but it is not too bad. No. 4 Section have received orders to go ashore under Lieut. Biden so that leaves our section with all the hard work to do.

This is payday, but we learnt that we are only to draw a £1, but anyhow it will buy cigarette papers and tobacco for we make our own now. I am getting very tired of being on board ship, for I feel like we are missing all the fun, nothing to look at but ships and the beach. We are general store keepers now, but I don’t care for I have no hard work to do.

Lost another horse today, if we go on like this we will have none left. It is very quiet on this rat trap of a boat, after I have finished with the Sergeant I just sit on deck smoking and reading.

The sea in the harbour is very rough, and the way it makes the small boats rock is very funny indeed, for you can see some of the fellows sick, and yet they have to keep on rowing. Sir Ian Hamilton arrived today to take full charge of all the troops here.

The water is still very rough and I can tell you the boys have a very hard task getting to the shore. HMS Amethyst came into harbour today very much damaged, she has been up to the Dardanelles, and the Turks hit her a few times. The sea played up with the small boats some of them were washed ashore, they were fastened by tow lines to the troopships, we had six washed ashore – one of the 11th Battalion fell down the hold he was badly shook up, but got off with broken ribs.

Now we are going to have some lovely weather by the look of things, although it is bitter cold, for the wind is coming from the Dardanelles, and we can see the snow in the distance. It is the first I have seen since I left England. It is now three weeks since we left Mena Camp Cairo, and it looks like months to me. Nothing much doing on board, all the work is on shore.

Still very cold here, but so long as there is no rain it is all right. I have made a bet of 5/- with S. Cook that we wont be in Sydney next Christmas. Most of the English troops have gone to Alexandria to be reorganised, which will mean more delay again.

We are quite busy today, for we are moving cargo, and some of the boys are making a companion ladder for the SS Ionian. I have just gained a little information that Lemnos Island is the place where St Paul was stoned to death. I can’t say for the truth of it. 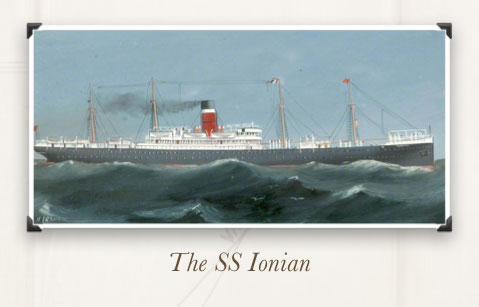