I was vexed at being charged so much, so were the others. I was just going through the door into the street, when a young native kid thought I must have wanted my boots cleaning, for before I realised what he was doing he had started to clean my boots. I let him finish then asked him how much, he said 5 piastres, Good Lord, I said to my pal, can’t they speak here under a 1/-, anyhow I paid him, and then we met some of the Lancashire Fusiliers from home, so I asked him how much we should pay for having boots cleaned. He said 2 1/7, fancy being done again, if I could have got hold of him I would have wrung his neck, for I had to stand so much kid from my pals, but I was determined that I would not be done again. We marched up the street to the park in Opera Square when a native came up wanting to sell us some peanuts, and he had them all piled up on some kind of thing. No doubt they looked very unwholesome, so thought Cookie for he gave the pile a crack with his stick and knocked them in all directions much to the dismay of the native crowd, then he cracked the native across the seat with his cane. Oh what a rumpus there was, we cleared laughing at the incident. Next we bailed up a cabby to take us to the Eastern Bazaar, and I will never forget it, being my first visit to any of these rotten Eastern places. We drove down the rue Wagh el Birket, that is the name of the street in Ezbekiyeh which street by the way is full of Immoral women, we drove right through that without a stop right into the Bazaar, and what a smell I can sometimes smell it yet. There you see all the thieves and rogues in the world. Can Can stops, drug shop, everything that is not good for you. I might say that curiosity took us into a Can Can place, which by the way is a native dance, enough said. I along with the others came out disgusted with the whole concert.

No sooner are you in the street again before you are molested by women of all kinds & creeds. I was just about getting fed up with this sort of thing so I proposed another feed in the town. We had to walk back and after a struggle we managed to reach the centre of the town, and I was not sorry for I had seen more in ten minutes in the Wassa as it is known by then, for the rest of my life put together. The dirty filthy mob of cattle they are that live there. Honestly, it is the most immoral place ever I was in. It is my first visit and the last. We had to have a drink to wash the dust & dirt out of our mouths before we had something to eat. We did not go to the flash French place again, we went to the Café De La Paix, Opera Square.

The manager was a Frenchman but thank the Lord he could speak English fairly well. His name was George Yokat and a very nice fellow he was because he shouted drinks. Anyhow we had a feed on what we had been dished. Steak & chips with tea & bread & butter – you will notice I underlined butter, the worst kind I have ever tasted. But never the less we had a good feed and it was cheap only 1/-.

By this time it is getting on, by the clock it says 10.30pm and we should have been in camp, but what do we care we have missed the last tram to the Pyramids. We will have to take a cab or taxi for we can’t walk eight miles into camp, which is all that distance away. Anyhow we saw a taxi, and asked him how much he would take us to the Mena Camp. He said 5/- each, that meant £1 for the four of us, we by this time never gave what they asked, so we got him down to 3/- each, which I reckoned was enough for the trip. We had a very quick ride home, but not so exciting as when we came into town. We passed by the Guard by going a long way out of our ordinary way but we managed to get to bed safe and sound by 11.30pm after a very busy day, and my first impression of Cairo was not much, but I intend to go in during the week again. I really want to see the upper classes how they behave. I could tell you more about the Wassa but it is better out of anyone’s diary. Tomorrow being Sunday we intend to visit the Pyramids & Sphinx, also climb the top and go inside after Church Parade which we have every Sunday on the side of the hill. 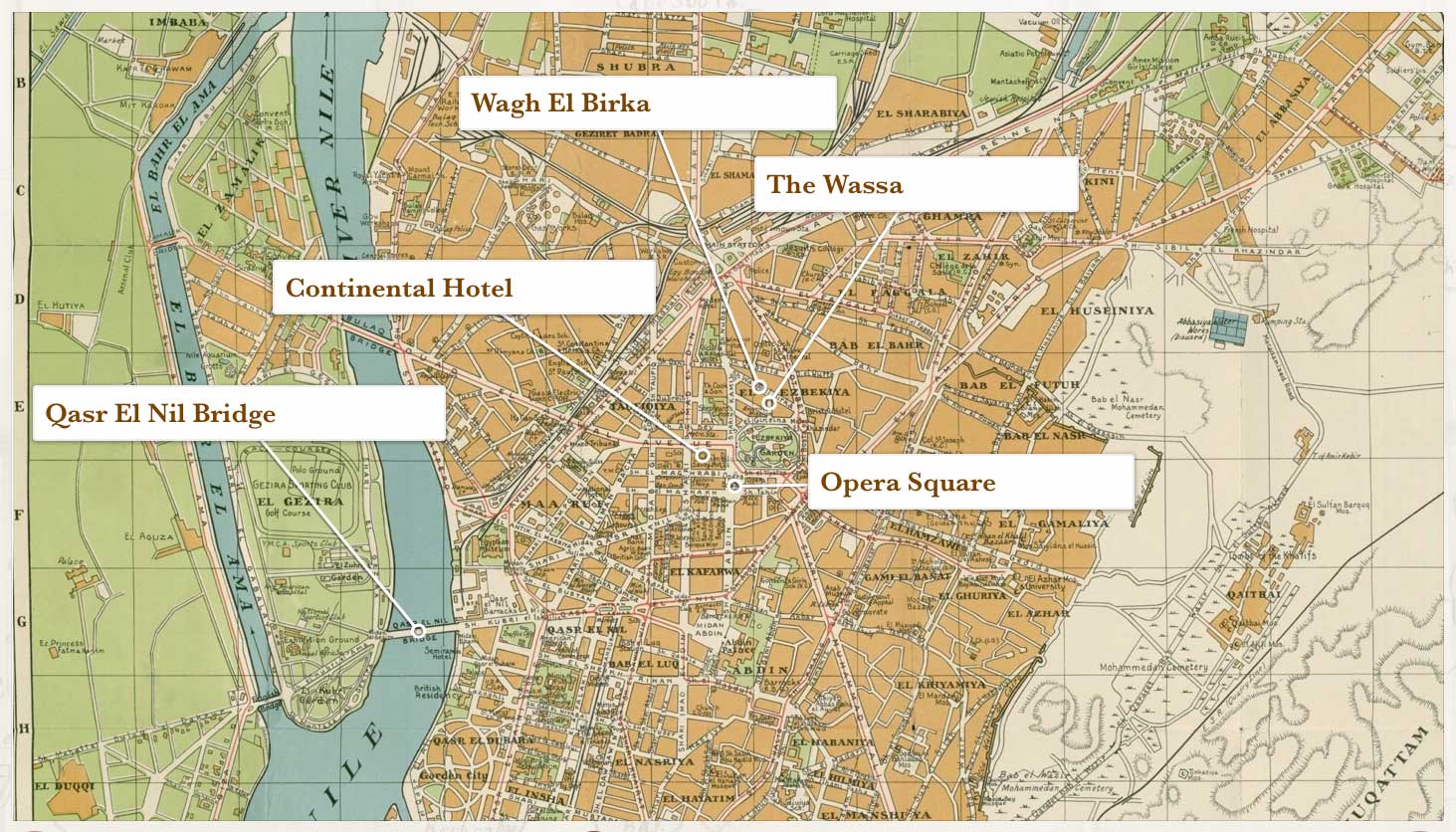