Miss Steel has just asked three of us out for a drive, so we will have a chance to see a little of Gibraltar. 5.30pm I have just been carried down to the carriage to go on our first drive. My first impression of Gibraltar was great. As you drove along towards Catalan Bay the mighty rock towered above us, like the horse would tower over a mouse, it looked very convincing with its vast amount of guns just peeping out, from all directions. I would not care to be in a storming party, if ever it was attacked.

There was also an aerodrome with 3 monoplanes in. We had the pleasure of seeing one go up. We then drove on to Catalan Bay, which is the far point we can go to. While there we met a French Sister of Mercy, she gave us smokes and toffee and said she had five brothers at war in France. After that we drove back along the Spanish frontier lines. It was very funny to see the British sentries and the Spanish just side by side yet never speaking a word to one another. What struck me most was the amount of smuggling going on, on the British side of the lines. I have seen men and women packing tobacco down their stockings, tying it on the arms and even fixing it on to fowl’s wings. Just so they could get through the Spanish lines, for I believe tobacco is 10/- a lb. duty in Spain, so it is quite easy to see why they do it for tobacco is very cheap in Gibraltar.

When we were coming back we met all the unknown workmen coming from various places, they raised their caps to us, and even the soldiers and police saluted us. We were taken along the docks, which were very interesting, and then we went through the camps, which by the way is the poor part of the town. It is here, as in Egypt where you see different nationalities, it is very cosmopolitan, and just reminds one of the Wassa in Cairo.

We arrived back to the hospital about 7.30, very tired but happy for it had been a great change from the hospital life. I know I slept better that night than I had done for a long time. After that we had plenty of drives for we were picked up every day, although I am still sticking to my little chair, which I can wheel about myself, I can go anywhere, bar down the stairs.

Here, we have been nearly three months, and I believe we are to go home to England on the next boat that there is room for us.

We have had all particulars taken and we are to go home at last. We have been given uniforms, etc. and I feel a little sorry at leaving the hospital, for the Sisters have been more like a mother to me, and the people have been good. I will never forget Miss Steel for she was everything to us. Sister, mother and she could never do enough for us. Also, I must mention Sisters Alsop and Bates for they did a great deal towards my recovery. I will remember to my dying day when I said Good Bye to them, they both kissed me, and they had tears in their eyes. I just felt like I was parting from my dearest friends. We went aboard the SS Birrima, one of the PO branch lines, she was a troopship. There must have nearly 300 on board. Australians and English troops. I had the luck to be put in the hospital ward along with Snowden. 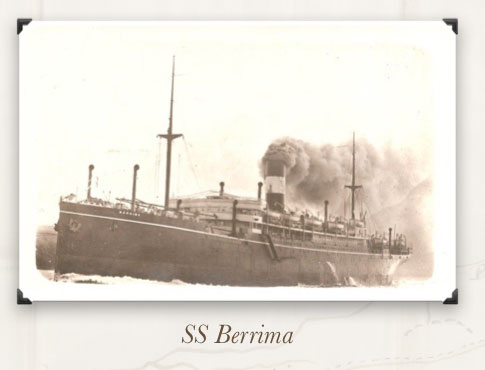 It was a terrible voyage for the German submarines were at that time sinking ships, we had to sleep with our life belts near us, and about every hour there was a boat passing for those that could manage to get up. I will never forget the Saturday night, it was a lovely night, but the ship was going top speed, and in a zig zag course. I learnt afterwards that they had seen a submarine. I was glad when day broke for we were to get an escort, which we did, four destroyers then we knew we were quite safe, bar hitting a mine.

We arrived at Plymouth about 10.30am and what a reception we got from the Naval men, and people. I along with Snowden was taken to the Red Cross Waggons, while the other fellows got into a waiting train. I was very disappointed for I wanted to go up to London, but we had to be content. We arrived at Plymouth Military Hospital about 1.30pm, and were put into one of the huts. Hut 4 it was, they were nicely fit up and the Sister and Nurses seemed very nice.