My First good look at Cairo.

We got leave from camp from 1 o’clock until ten at night, but I might say that we have no intentions being back by that time, oh no, we want to explore this great eastern city we have heard so much about at one time or another. We left Camp at 1.30pm, and we had to walk along Cambeis Rd to the tram. We had quite a time trying to get on for they were simply rushed by the boys. We gave the tram up for they were even on the very top of it, so we hired a carriage in pair, four of us. Four other fellows from one of the Battalions were in another one, and I may say there is no speed limit in Cairo.

We were going along nicely, when the other fellows challenged us to a race into Cairo. We took them up, and away we went. Well the rule of the road in Egypt is to keep to your right, quite the opposite to home. Well one of the other boys thought he could drive better than the Egyptian driver, so he gets the reins, and drives away. All went well until he saw another carriage coming, what does he do but drive over to the left side of the road instead of keeping on his right. The result was funny, as he turned to go the right, the other fellow did the same, before you knew what was going to happen, he had taken one of the other drivers wheels off, what a mess, but we could not help but laugh at the Egyptian picking himself up, and gesticulating for all he was worth. It was no use we did not stop – away we went over the Kasr-el-Nil Bridge into Cairo.

We pulled up at a place called Opera Square right in the centre of the city. The first thing we had to do was change our money into Egyptian coinage.   We should have got 100 piastres for a pound, but they would only give us 95, so we were done a shilling right of the reel. Of course we were new chums, and with getting 95 piastres of our pound we thought we were all right. Of course we found out these things after wards when we had paid for our experience. There is 5 piastres to a shilling so will have an idea how many we should have received for our pound.

There are 20 piastre and 50 piastre pieces, which are nearly like an English 5/- piece. Anyhow we got over that performance, and now for a drink of some kind for it was a hot day. We looked around and saw any amount of little tables outside most of the hostels, but we did not like the look of these drinks which were mostly French wines, and we decided to go into the Grand Continental Hotel which by the way is one of the swell hotels of Cairo. We went inside, and Cookie asked for four English beers. They were brought to us, and he asked how much – 10 piastres. 2/-, he nearly had a fit, we drank the beer, which was more like coloured water than anything, so that made us all turn hesitaters, and we decided to take soft drinks with ice cream in future.

We have a good look around the town, visited the Post Office for stamps, and I think we got every kind that we could. Then we had a look at the markets, you never saw such a cosmopolitan crowd in all your life. There were French Arabs, Turks, Indians, Dagoes and every nation under the sun represented here. The first thing we had to buy was a little swagger cane, and we were again robbed by paying 1/- for a stick that only cost 1/2, poor innocent soldiers. After getting the stick we were feeling a little bit hungry and we started to look out for a place to get a good feed. We eventually came to a fine big French place so we said we would try this one. In we marched, and the first thing that I saw was again the number of small tables with women and men drinking this wine, and all speaking French, just like a lot of monkeys in a zoo. I told my pal I was going to learn the French then I could understand their lingo. We had to go up stairs to get dinner, so we sat down, in comes a black waitress, and the menu was in French. We had to point to the various things we wanted. I think we had fish soup, chicken & sweets and also some of the French wines. We called for our bill, and there another surprise was in store for us. I looked at mine, and great was my surprise to find it was 25 Piastres 5/-. They were all alike, more swindling, but still another lesson. 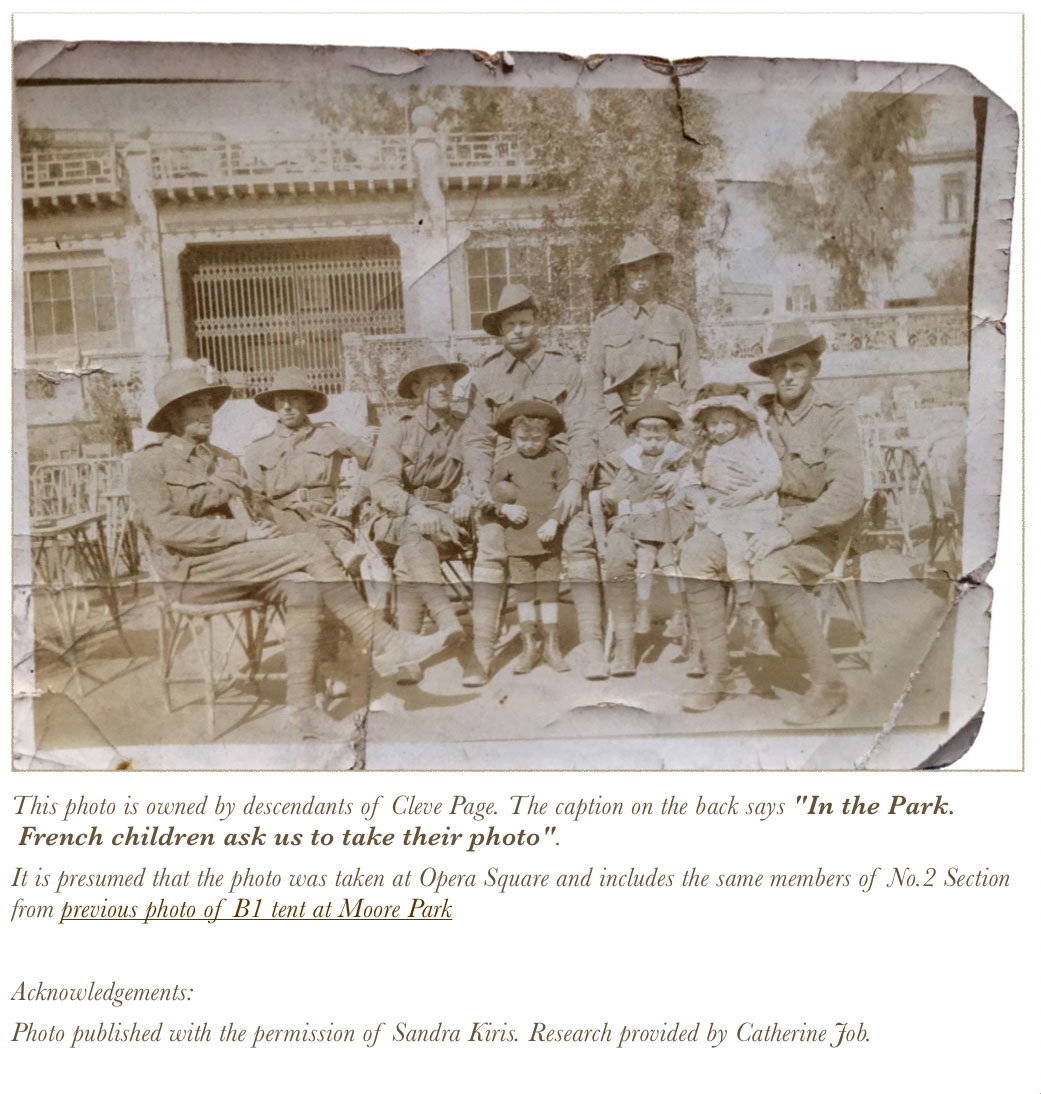