We are having a little spell today carrying timber from the beach to make a magazine for our explosives, and this is the kind of spell we get, but we are to get a nights rest tonight. The beach is full of wounded waiting to get away to hospital. Just fancy some of the finest men lying there maimed through no fault of their own, all for honour and love of country that reared them. We never know how soon we may be there too waiting our turn to go away wounded.

Another day of hard work, but it is a rest from the firing line, but I do believe it is better up there than here on the beach for they are dropping shells every where, and a man never knows when he will stop a snipers bullet or get a piece of shell to go on with.

We did get our first rest last night, but sleep was out of the question you might drop off but then you would awaken with a shock. Just fancy finishing work with a royal salute every night. We always had a lot of shells to contend with before dark, then our ships and Howitzers would reply to them.

The first of May, fancy Mayday with such a fine firework display as we witnessed this morning. By the look of things they are getting hotter. There goes old Simpi with his donkey up to the front trench for wounded. If anyone deserves a VC it is him, for time after time he goes up the gullies for men, and he always comes down with his one on the donkey and the other walking with the aid of Simpson.

We are just formed up again to go up the noted Shrapnel Gully to look after some water springs or something of the like. I never liked the Gully for there are always plenty of snipers in about the bushes. We proceeded on our way quite unconcerned and all the time you could hear the ping, ping of bullets. They must have been very close to me at times for they sang me a song more than once on my way. We halted after a while in a place I for one did not care for. I told Cookie that someone would be hit here, he only laughed, but I seemed to feel that something was going to happen, and it did to. 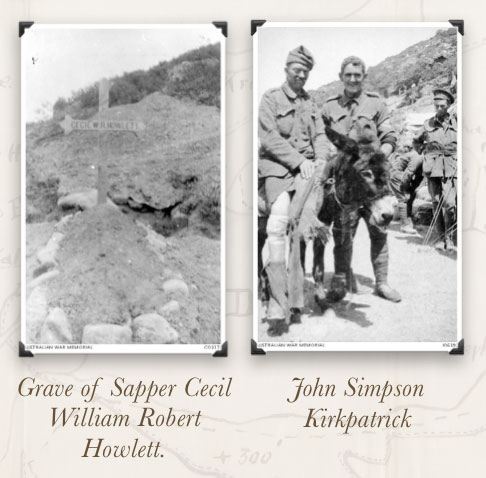 When we halted Cecil Howlett, Cookie and myself lay down to rest. I had just lit up a cigarette when bang came a shell, it burst right close in on to us. The cap, or fuse, hit me fair in the knee, I let out an oath, for it carried the kneecap away. I then look around to see who else was hit, and here is poor Cecil Howlett with his head blow off, what a shock I received, it was worse than my own wound to me, and here is Cookie not touched. They carried me to some kind of cover, and the Red Cross fellows fixed us up as best they could. All I wanted was a smoke, and a drink. No sooner was I moved away then another shell burst in the same place, but hit no one because they had moved away. It was just then that Cookie came to say goodbye to me, how he felt leaving me like I was, and I felt the parting too, for we had been the very best of chums ever since we enlisted in Sydney. He asked me for my rifle which I gave him, and wished him the very best of luck, and then he was gone. I was only laid there a short time when I was carried down on a stretcher to the beach. I was placed with the other boys who I had only been looking at a few short hours ago full of life. I was then, but now, not caring what happens only with this consolation, that I had done my duty. By this time I was feeling a little sick because my wound was paining me. I tried to sleep but it was no good, for fellows were moaning all around me, some were dying and singing out for their mothers, others for sweethearts. I tell you it makes you think of your dear ones when you are lying helpless like we were, for we are only like babies when we are wounded, helpless and do not care how things go with you.