We are to pitch our tents up today, and will be allotted so many in a tent, under one N.C.O. I have been put in B1 Tent with quite a nice crowd of boys and we are quite happy in our little canvas house. They picked out the drivers, and now we are something like a company, we are getting licked into shape by degrees. Dinnertime again time passes very quickly now that we have plenty to occupy our time. Fall in again just heard we are to get our equipment and uniform. They are going up by sections ours will be second. 3.30. Just received my equipment. Rifle, bayonet, belt, pouches, boots, hat and everything that a man wants. I along with the others are going to swank into Town tonight, and there is such a rush to get into the uniform that you do not know which is which. It was not so bad until it came to putting on the putties. I had mine wrong side out first time, then the second time I got mixed up with the tent pole, so I determined to go out side and put them on. There must have been more than a dozen trying to put on these Putties, and making some awful messes of them. Anyhow I managed to fix mine on to my liking, and I knew we would get better at the game. What swanks we were that night in the city, we though that we were just it. When we got back to Camp we did not like the idea of pulling off these blooming putties but it had to be done. There we were pulling yards and yards of these things off our legs. I can tell you there was some choice talk going on. This was our first night under canvas, and my tent mates were:

So we were a nice little crowd. Anyhow, we had to sleep with our feet to the pole, and I can tell you we often got mixed up, more so with Page because he was very tall, and his long legs used to invade Hudson’s territory. 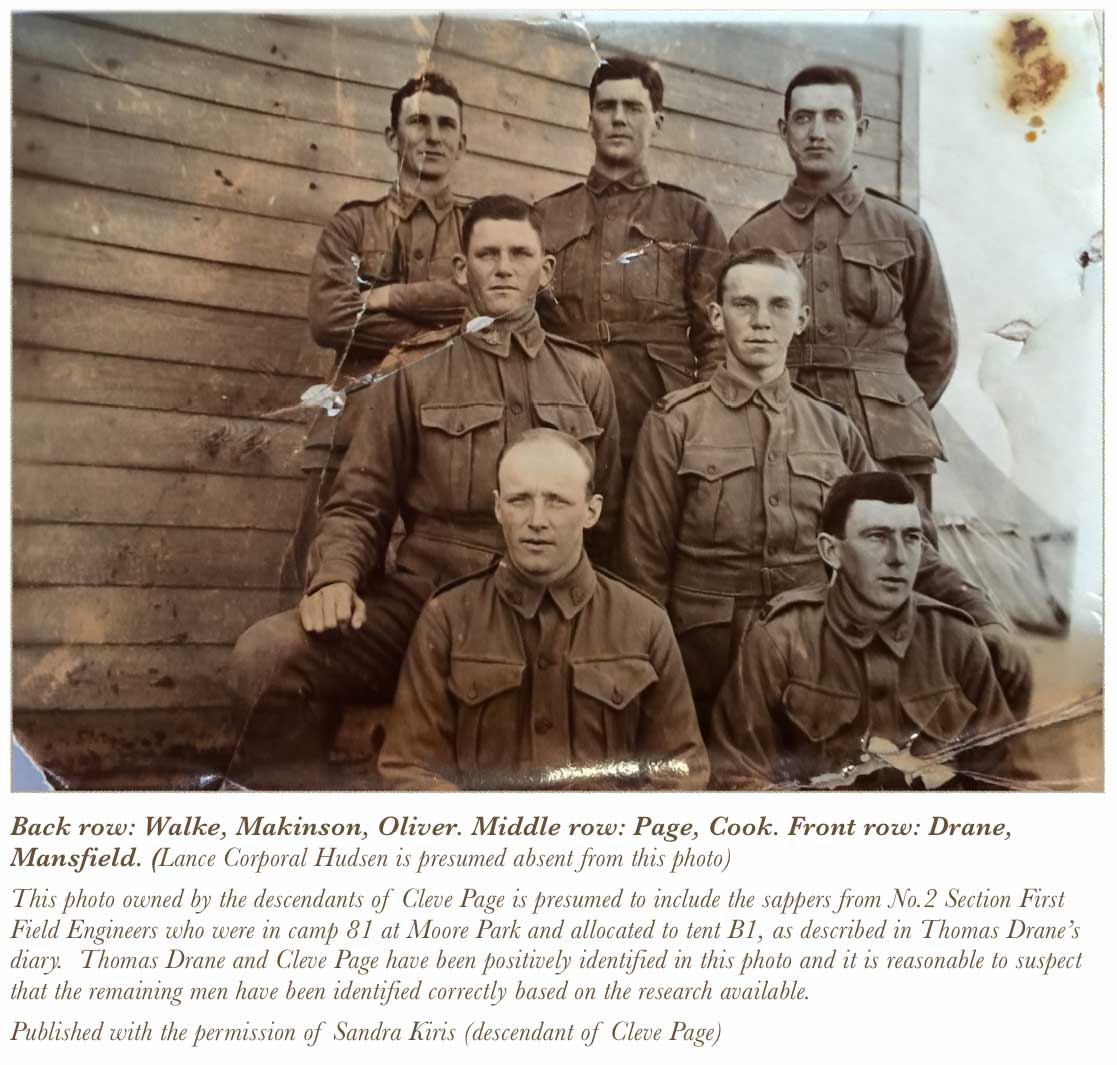 There goes that Bugle, and I am Mess orderly today. That is – look after the Boys tucker. I get out of all the drill, but then I have to feed the brutes, and they want some feeding, anyhow, they have chops for breakfast, stew for dinner, and jam for tea. I am a general slavery for I have to wash dishes, pots, dixies, etc. and it is no good. At the present time you would think I was a chimney sweep by my face for it is a black as the ace of spades, with cleaning the dirty black dixies, anyhow I will soon have my turn over, and it does not come every day.

We are to have quite a change today for we are to learn the various knots that are used in building bridges etc. I won’t detail them, but I can tell you we had a very easy day of it. Now this is what we had to do every day. Drill squad. Company drill. Rifle exercise. Knotting. Trench digging. By the way we are to go out to Centennial Park for that and Bridge building. Musketry. Guards drill. Bayonet exercise. So I do not intend to write any more of these things because it will only tire anyone to keep on reading about them.