We are quite interested with the first glance at Cairo for it seems so strange to the natives, and the number of foreign people, and the women wearing the masks & veils over their face. What I noticed in the native women was their lovely eyes, but for their mouths well I could not see them. We were then marched to the trams (which are on the European style) where we then rode away to our camp, which we learned was near the Great Pyramids and the Sphinx.

We had a good look for them, and we seemed to be a long while in reaching them, because we could see them so far away. But eventually we stopped and had to get out and march a little before we came to our camp. My first impression of it was not much. We were rather more fortunate than the Second Field Company for they arrived a few days before us and had to pitch our tents for us, which for us was very nice. We received a ration of biscuits and Bully Beef for our dinner with a promise of a hot tea, which we are still getting. But it was no use growling for everything was upside down with ease so we had to make the best of it.

We had to fall to and get the Baggage from all the trams, and by the time this was done it was near dark, and we were tired too. We drew blankets and we were told off to tents, our section was again very lucky for we were all put in one big sepoy tent. I just dug the sand out a little, pulled the blankets over me, and said good night, I was very tired indeed and so were the rest of the boys. 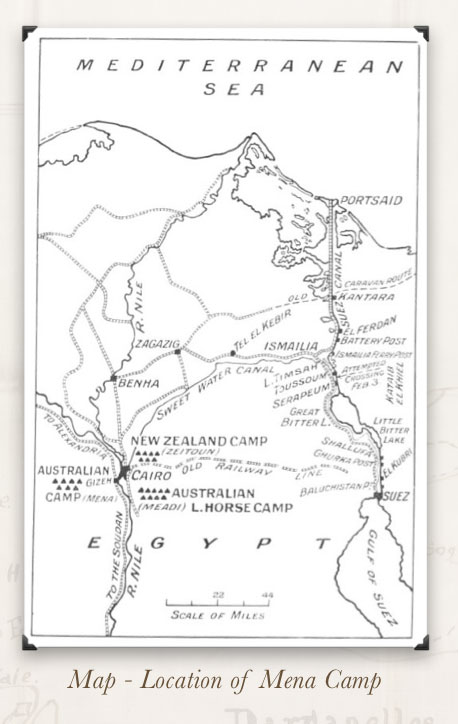 More work rearranging the tents so that we can put the horses between the two lines, and the waggons at the end. We are to have a mess room built by the natives. Now it is beginning to look a little bit more like a camp for the Infantry are putting up their tents and the Artillery. It will look like a huge white canvas city. The natives are making roads all over the place and also making two square tanks for our water supply. We filled the day in nicely and are now free to have a look around the camp, but can’t go into Cairo yet. We had a look at the Pyramids but decided to wait until Sunday before climbing up to the top and going inside. The Army Service have arrived so there is a chance of decent food tomorrow for we depend on them for our rations.

Now we are getting some read hard work to do, carry stones from the hills around to make boundary lines between the road and our camp, and the Infantry are on the same game, we also made a place for our cooks to cook their celebrated stews. The Egyptian Government is allowing 6′ a day for each man as an extra allowance being the army of occupation, it will make a difference to us. I have just witnessed a tribe of natives paying their tribute to their God the Sun. They looked very funny kneeling and bobbing up and down like a Jack in a box, then they would mutter something to themselves, with their hands up in the air, then nearly knock their brains out with bowing to the sun. What funny customs they have, they are just like they used to be in the days of Israel. You see a native farmer ploughing with a single furrow plough with an oxen and an ass pulling it. They never have two animals alike in a plough. They are great believers in irrigation, but the way they do it, there are canals run off the Nile and that is how they get the water, but now comes their idea of irrigation. They have a long pole fixed up with a cross piece fixed on to that with a big stone at one end, and a bucket at the other. What they do is to lift up the stone, and let the stone go, and it pulls up the bucket, then they empty into a kind of trench were the water runs on the land. I will try to illustrate what I mean. 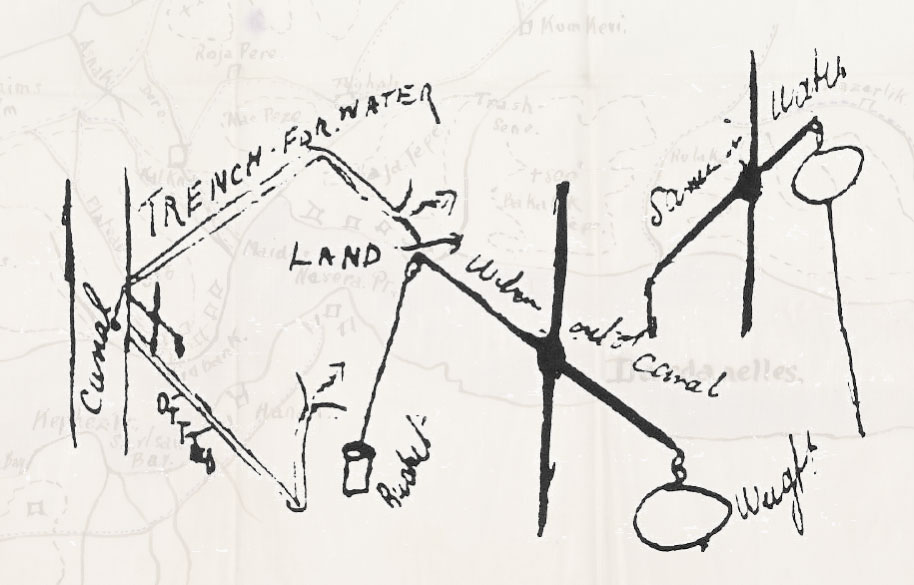 Now you can see what I mean. Now again is their primitive way of grinding corn. They have various ways, but I can only speak of two ways that I saw. One is were a native gets two large round pieces of stone, and by putting the corn between the two, and turning the top stone around he grinds his corn. The other way is on a much larger scale. You see a large round place with a long pole sticking out with a blind folded bullock fastened to it. This bullock has to turn the pole around and around, as he goes around the pole, which I should say is attached to a grinder, turns the grinder as he puts in his corn between the two, and he seems to get a fairly good result from his method. The reason they blind-fold the bullock is so that he does not get dizzy or sick with going around the mulberry bush. Then again you never see a native man carrying sugar canes or anything. No, he makes his dear little wife do that. You will see a dirty woman with her child, and a big load of sugar cane, or straw on her head, while her husband walks on smoking his dirty cigarette. The children you see are a filthy looking crowd (of course I am speaking of the lower class of natives, for up to date I have had no chance to study the Egyptians). You will see the flies in crowds in the kiddie’s eyes, they never think of knocking them away. I will leave it over until next week, and then I will be able to give you my first impression of Cairo.